Coffee is an elixir savored by populations throughout the world. Almost everyone wakes up in the morning and immediately heads to the kitchen to brew up a steaming mug. With all the coffee cafes and boutique shops out there, many of us have forgotten where coffee comes from and how special those little beans are. In East Africa, coffee is more than a drink, it is a culture and a ceremony that brings communities together.

Many cultures have rituals, like Japanese tea ceremony or Spain’s Festival of Onions. In France, it is long communal meals where everyone lends a hand with the making, eating, and cleaning. In East Africa, namely Ethiopia and Eritrea, the coffee ceremony is something widely cherished. 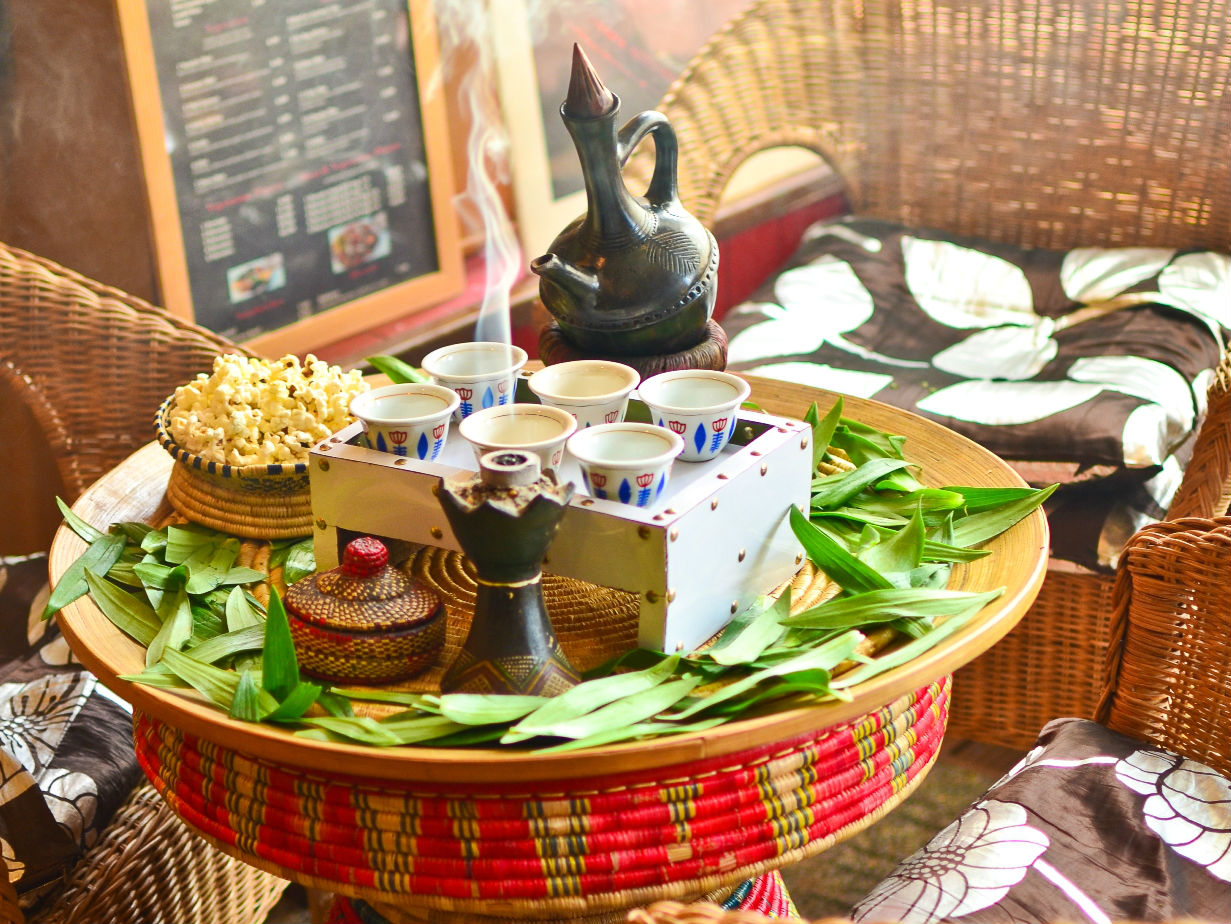 The ceremony is usually performed by the woman of the household. To begin the ceremony, green coffee beans are fire roasted over an open flame in a pan. Following that, the beans are ground down with mortar and pestle before being put into a special vessel for boiling. The pot is called a jebena. Depending on where you are in Africa, the jebena may or may not have a spout. Made from pottery, the jebena often has a spherical base and stout neck. Some also have a straw lid.

The coffee will boil up into the neck when ready, and is poured from the jebena into another container for cooling. Then, the liquid is poured back into the pot until it bubbles up again. Every time a brewing is complete, the coffee is strained through a fine sieve. Coffee grounds are brewed three times. The first round is called awel in Tigrinya, the second is kale’i, and the third is baraka. .

To serve, the host pours the coffee for all participants by moving the pot over a tray of small cups from the height of about 1 foot (30.5 centimeters). You may think this cases splashing and a mess, but the hostess will do expertly until all the cups are full.

Other countries in East Africa, like Sudan, have a slightly different version, where the coffee beans are fire-roasted then placed in a clay container with spices, cardamom, and pepper. 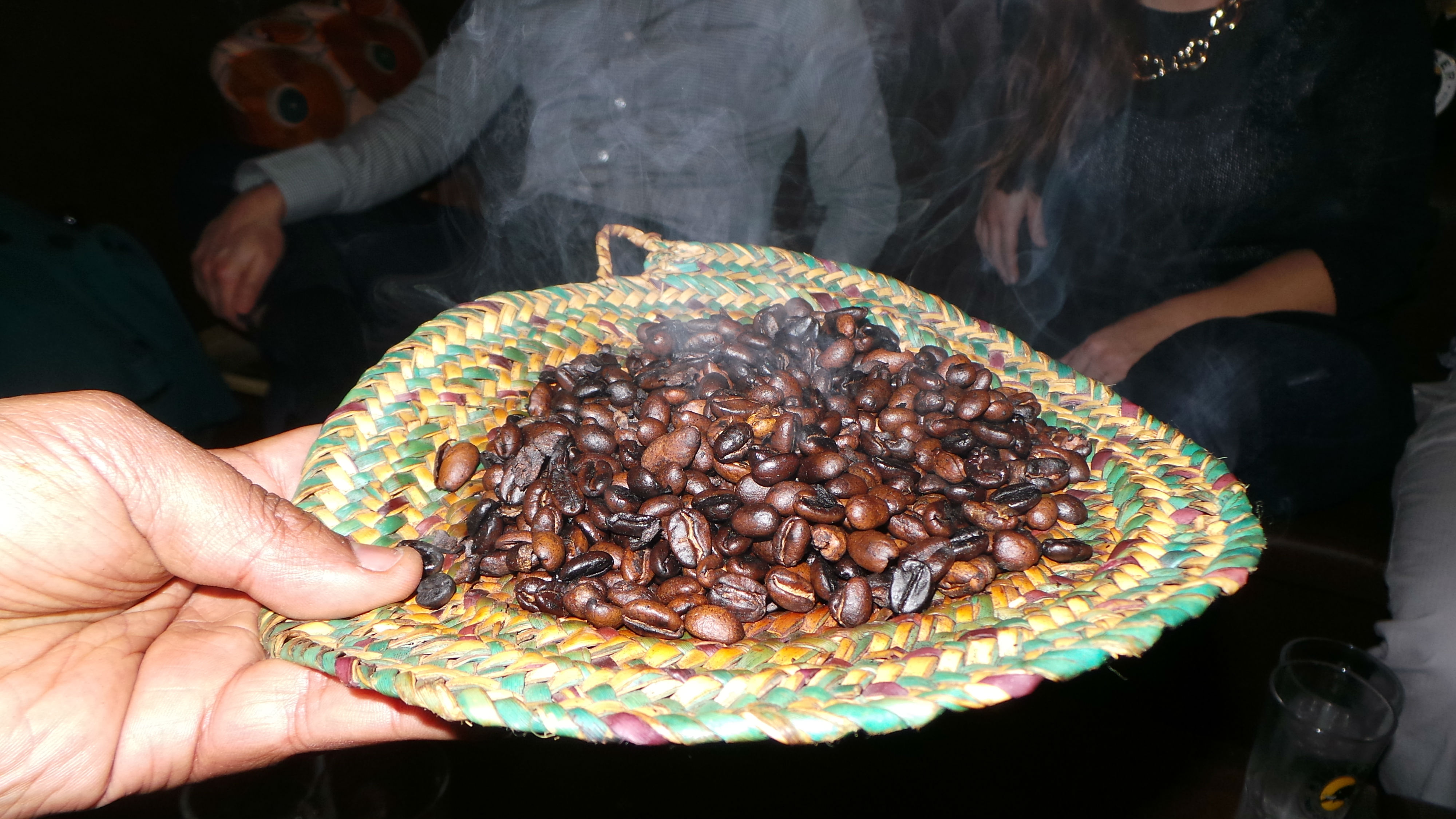 The Importance of Coffee Ceremony

Imagine having the chance to watch the deft roasting of beans, the stunning display of the seemingly effortless pour, and the scent of carefully crafted coffee wafted up to your expectant nostrils. When coffee is made with such a level of love and care, the aroma and texture on the tongue completely changes from what you are used to receiving from Starbucks. For East African cultures, the coffee ceremony is an ancient art that brings people together and respects their presence.

Even as Africans leave their homeland to settle around the world, they are bringing that tradition with them. This brings their culture closer to you, even if you are not aware of it yet.

How Native Apples Can Help

Bringing worldly culture to you, wherever you are, as a way to raise social awareness and acceptance -- that is the Native Apples way. Not many people know about the importance of coffee in East African culture, so when the chance arise to experience it for yourself, you should not hesitate. This allows the person doing the ceremony to honor you in a traditional sense but to gift you with the essence of their homeland. In turn, you are showing respect and tolerance.

The Native Apples community is blessed to have a provider offering Eritrean Coffee Ceremony experiences. For all those avid coffee drinkers out there, this is your chance to be able to sit-in on this divine ritual and savor some of the best coffee you will ever have.